Posted on 19 March 2017 by ssquah
An Appeal to Old Frees for Funding
For the Staging of
SWORDFISH + CONCUBINE
(a play written by
Kee Thuan Chye, an Old Free)
To Raise Funds for Old Free DATUK OOI EOW JIN 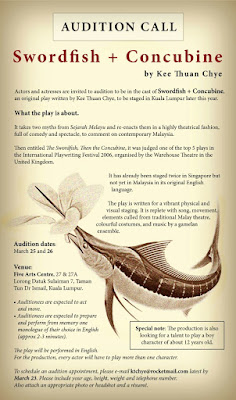 Two years ago, I was much humbled to have been able to play a small part in highlighting Ooi Eow Jin’s plight to the general public and the response was generally very well received. Today, I am calling on everyone to rally around Uncle Ooi again.
In particular, I am calling on well-wishers to help fund the staging of Swordfish + Concubine, a play by Kee
Thuan Chye, to raise funds to help Ooi Eow Jin, who is 78 and suffering from Alzheimer’s and whose son recently underwent surgery to remove a brain tumour.
Penang-born Eow Jin retired many years ago as RTM Orchestra conductor. After that, he was a lounge pianist at Hotel Majestic in
Kuala Lumpur until he was stricken by Alzheimer’s.
You can read about Eow Jin’s situation here: http://www.thestar.com.my/metro/focus/2016/05/07/wife-of-ailing-composer-in-a-bind-76yearold-khaw-shoulders-the-burden-of-caring-for-her-sick-husband/
For more information about Eow Jin: http://www.nst.com.my/news/2015/12/119181/tribute-ooi-eow-jin
What the play is about
Swordfish + Concubine takes two myths from Sejarah Melayu and re-enacts them in a highly theatrical fashion, full of comedy and spectacle, to reflect on Malaysia today. Previously entitled The Swordfish, Then the Concubine, it was judged one of the top five plays in the International Playwriting Festival 2006, organised by the Warehouse Theatre in the United Kingdom. It has already been staged twice in Singapore but not yet in Malaysia in its original English language. The play is written for a vibrant physical and visual staging. It is replete with song, movement, elements culled from traditional Malay theatre, colourful costumes, and music by a gamelan ensemble.
Kee Thuan Chye is staging Swordfish + Concubine for the first time in English in Kuala Lumpur in October 2017.
Proceeds from the show will go to Ooi Eow Jin and his family. 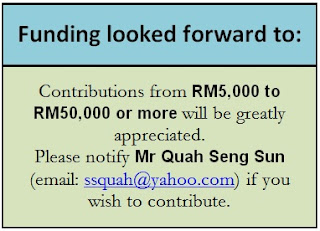 For the aid provided, the contributor will be duly credited.

Complimentary tickets will be given to every contributor to any performance of their choice. Other special benefits that the contributor may require can be discussed. 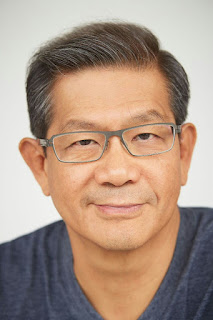 Kee Thuan Chye is producer, director and writer of Swordfish + Concubine. He has written numerous plays for stage and radio since 1973 and is best-known for 1984 Here and Now, The Big Purge and We Could **** You, Mr Birch. All three plays have been published and are available from Amazon.com.

His subsequent play, The Swordfish, Then the Concubine, was judged one of the top five plays in the International Playwriting Festival 2006, organised by the Warehouse Theatre in the United Kingdom. It has been staged twice in Singapore – by W!ld Rice in 2008 (directed by Ivan Heng) and by Young ’n’ W!ld in 2011 (directed by Jonathan Lim).
Kee has also written numerous radio plays many of which were broadcast on RTM in the 1970s. He has been a judge of the prestigious Commonwealth Writers Prize. He has been invited as a guest writer to numerous writers’ festivals in Australia, Hong Kong, Sri Lanka, Britain, the Philippines and Singapore.
He is also an actor who has had speaking roles in international films like Entrapment, Anna and the King as well as TV productions Marco Polo (for Hallmark) and Secrets of the Forbidden City (for BBC and The History Channel). On stage, he has acted in countless productions since 1977, including lead roles in the Australian plays Gulls and Honour, and in the one-man play The Coffin Is Too Big for the Hole by Kuo Pao Kun. He considers his best stage role as that of Willy Loman in Arthur Miller’s Death of a Salesman. He has also directed a dozen plays for the theatre.
This entry was posted in General and tagged fund-raising. Bookmark the permalink.